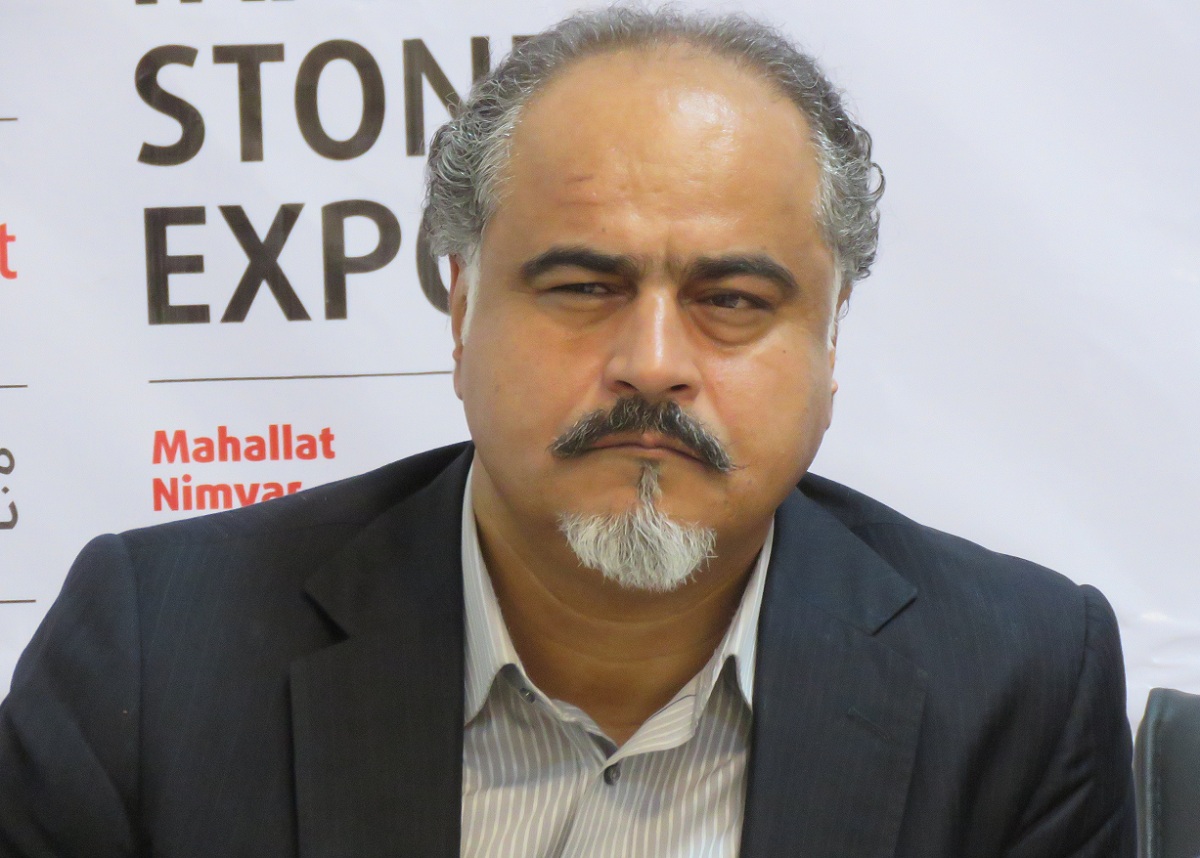 This is half a stone's throw from here. In 1320 the late Ghanbar Rahimi came from Virij Qom and started his mining activity with "Fire Mountain" mine. Our grandfathers used to work on stone mines at the time, famously known as gavers and mineral jacks. At that time there was no machine, no bulldozer, no shear wire, extracted with gavers, cut and loaded with mineral jacks. The work of the late Ghanbrahimi began there. The late Rahimi settled here and married in Nairobi. The story of the Iranian rock began from his time. Here the travertine mines were as good as walnut travertine, and the Italians came in before them (before the revolution) and took stones from here.

Kanbar Rahimi was successful in his work

Abbas Abad mine and Haji Abad mine were later discovered. The late Rahimi began his work from the fire of the mountains and Abbas Abad and spread it to the marble of Joshushan, the marble of the Qorveh and the Chinese Azna (Darijan Darood). He was successful in his work, and the workers here were talented and active; the talented and hardworking manpower made many of them lose their manpower. The presence of Ghanbari Rahimi in such a place has nurtured these students. However, these were the students of the late Rahimi, who gradually learned the work of stone in the area like his father and other stone pioneers.

The best travertine mines in Iran

With the late Aqaba of Ghanbarrahimi the city of Nimar became a stone city. Almost everyone here is either a mining engineer or a miner or factory worker. Some also work in the field of stone transportation or have established stone-related industries so that the center has become a center for meeting the needs of stone. For example, someone who crashes his device in Shiraz comes here to repair it. There are firms in Nemvri that sell heavy machinery, and Nimvr even has a great place to buy stone. All these potentials have led to the formation of numerous communities in this city.

9 acres of exhibition space to be built in 86 days

Yekta Stone Exhibition Company was established in 2008 and held the exhibition in the same stadium for two years. We applied for land and a government agency in the Central Province and the province's Export Development Working Group approved the allocation of 30 hectares of land in the name of Yekta Stone Exhibition Company. In the first phase of the land assignment, we were given 15 hectares and we were going to give the remaining 15 hectares in the second phase. In the first year the administrative process was followed and the land was leased to us for a year. We went in and did the first year of wall and water and electricity and other early work. At the time of the exhibition in September or October we insisted that the exhibition must be held in its place; we had about four months and planned to get things done. We designed 9 acres out of our 15 acres and built a four-thousand-foot salon in 86 days. 9 acres out of 15 acres were prepared for the exhibition that year. Office building, exhibition niches and recreation of landscaping, green space, landscaping, parking, plumbing, electricity and lighting - all in 86 days.

We will have twenty thousand meters of indoor hall

Increasing the number of companies and visitors

We have had 94 foreign exhibitors since the year and their representatives have been present at the exhibition. We have between 20 and 30 percent growth in attendance each year, and our visitors are growing every year. Over 400 domestic and foreign exhibitors participated in the event, with countries such as India, China, Italy, Turkey, Brazil and Spain participating in the exhibition.

Airport and hotel infrastructure needs to be increased

We have many shortcomings. Failure in infrastructure such as hotel, transfer, airport, etc. These are our major problems that do not allow us to move with the right power and speed. We have signed agreements with exhibitions in countries such as India, Turkey and Brazil, but due to lack of facilities we cannot implement them with certainty and serious will. Our problem is the lack of infrastructure. If the facilities are available, we will probably bring the staff and active labor of the exhibition from Tehran or Isfahan. Our resources are limited and every year we try to fix the defects to the best of our ability. Tehran has been the venue for various and varied exhibitions for nearly 40 years.

We had a shortage of space

This is a small town. Lack of liquidity is also our serious problem. Invite foreigners to this exhibition but infrastructure is not ready. If the hotel is well-equipped, there can be more maneuverability, and foreign companies will be more welcomed because the area has good potential and many customers for their products. Heavy machinery companies and dealers are eager to attend the exhibition. We have a shortage of heavy machinery this year as all the miners and consumers of these products are here. The mining industry is keen to attend the exhibition. The first and second days may be frustrating, but almost everyone on the last day is satisfied with the good sales of their products and the following year. There are 280 factories and 42 saws here and all are consumers of machinery products. I think this number is very high compared to the average across the country, for example there are 2000 stone mills in Mahmoud Abad in Isfahan, but they might not be the size of foreign saws here. Last year, we offered to allocate the remaining 6 acres of the 15 acres to a permanent cut-and-paste exhibit so that those who bring the stone here can come here during the year and the customer comes and visits and one person provides company information.

It is up to us here. If you want to move one of these crude stones in Tehran, you have to pay six million tomans. When you get a stone's work and come in, it's like you're coming to your house and you don't think you're inside the exhibition. Here we are all partners in the stone industry. We do everything here, not only during the exhibition but also throughout the year and do as much as we can. In fact, we built a set, and one year, two years later, more or less maybe we will step aside and others will continue. If you want to start a stone research institute, if you want to launch an international market and ... We welcome anything that is good and effective for the stone industry. There will be, and will be, reporters, businessmen, business associates, customers and all lovers of the stone industry.

When we started building the exhibition in the middle of the night, we asked Mr. Karbala'i, who is one of the area's financiers, to build a hotel here that is being built at the entrance of the neighborhood and for the ten-story hotel exhibit. The hotel that is put into operation will solve a significant part of the housing dispute. If we take the second phase of the land, the second 15 acres, we will build the hotel.